Everyone has a different way of looking at things. I am in the midst of a conversation with my editor about some of the comments I have seen on Facebook that are saying these storms and wildfires are God’s Judgement. Personally, I don’t see it that way, but some do. My editor said, ‘out of ashes comes new, right?’ And also said, ‘I personally think media is playing into it a whole bunch too. Because there’s numerous issues going on around the planet, but only certain things we hear about.’ I agree with these two points. God is not asking us to be subservient slaves. He loves us so much more than that. 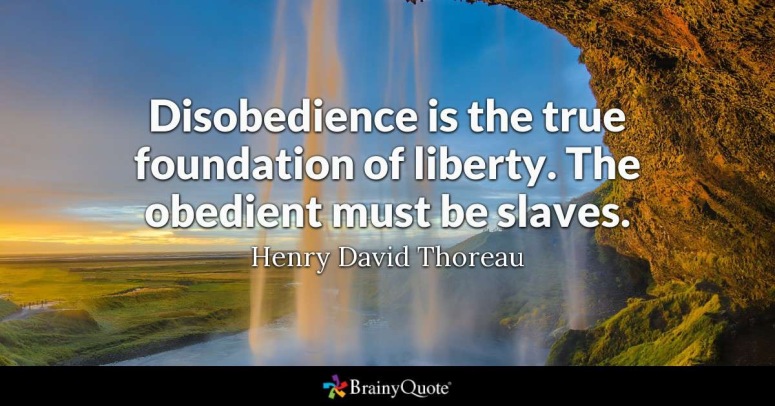 Amazing and true, wouldn’t you say? When we disobey we are going against someone else’s will for what we should do. I am sure at one time or another we all have disobeyed our parents. We have had different experiences and therefore, different viewpoints on things. So, to disobey and live up to our own expectations is often how it goes.

The second quote comes from Edwin Louis Cole. He has a deeper meaning and explanation to Disobedience. His notion moves into the realm of the spirit. We all have a spirit and yes, our spirit is meant to be obedient to God and God alone. Yet, we human beings have free will and it is very rare for anyone to ever be completely obedient to God. We are not puppets and yet He still loves us all so much that He sent His Son, Jesus Christ, to take the punishment of eternal Hell that we all deserve for turning our backs on Him so frequently.

This quote would be the antithesis of my belief that God is not meaning these fires, earthquakes and hurricanes to be a wake-up call for us. I believe God to be a good, loving father who would gently say, ‘My child, you may not want to go that way, or decide to take part in that activity.’ We live in a world that says, ‘Follow Your Heart!’, but unless your heart is 100% connected to God as only Jesus’ Heart is, I wouldn’t recommend that activity. We will disobey. I admit it, I sin. I disobey God all the time. But I believe in the redemptive power of what His Son, Jesus, did for all of us on the cross. And because of that, God doesn’t see my Disobedience. It’s the perfect misdirection created by my big brother, Jesus Christ! Amen.